More Cleric bashing from Yours Truly 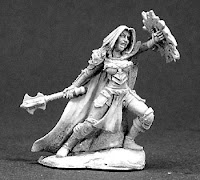 I made it clear from the title what this post is about, so if you're a fan of clerics, you might want to find something else to do for a little while.

My second-favorite class house rules (before now) was always trying to do something about clerics. I just don't like them. I've played them and they always strike me as lost in the middle. I can respect the fact that it should be a player's decision how he feels about a certain class. If Tim really digs on clerics, he should be able to play one. My only issue with that is it means that I can't do certain things I feel are necessary to my campaign. Specifically, if I do allow a cleric class, then I can't fold the cleric spells into the magic-user lists, which means, in turn, that I have to make use of NPC clerics, rather than magic-users with "cleric" spells.

Something that I especially dislike about the cleric class is the half-ass nature of it, as written. There are more religions, philosophies, pantheons, and/or systems of belief than you can shake a stick at. There is no acceptable way to abstract that down to a single representative class. So, in order to "fix" this it is needful to create a detailed pantheon, complete with how its clergy functions. That's the kind of thing I like to leave vague. It's another one of those "avoid restrictive choices" things.

No sir, clerics need to be gone like the thief, and ironically enough, for a lot of the same reasons. When I am in this hyper-LBB mood, I firmly believe that any character can be built from the two archetypes of Fighting-Man and Magic-User. Add in the absence of a restrictive skill system and the two classes become a starting point, a foundation, for the type of character you want to play.

All the cleric's spells can be folded into the M-U lists without any problems (I think). I do not believe classifying the spells in any way, thus restricting their selection, is necessary. Want to play a druid? Use mostly nature-based spells, there are quite a few. No need to make it anything official because that leads to things like "Druids can't do (whatever)". There should only ever be two broad-brush restrictions:
Any sort of religion-based power/authority should be setting and role play based. There are numerous examples in books and movies of priests and other so-called holy men who trucked with the powers of darkness. The Bishop of Aquila in Ladyhawk cursed two lovers using dark powers. So, a church figure could be based on the M-U class and described through role play as belonging to the church. Likewise, a Fighting-Man can belong to a religious fighting order.

One thing I may do, though, is add some sort of undead-combating spells. I'm not real sure on just what, but they would go deeper than just turning undead. Enough quantity and variety to allow an M-U to model himself as some sort of Theurgist or Witchhunter.
Posted by David at 2:19 PM