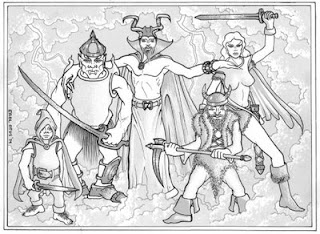 Back in the early days there was a fairly steady stream of new classes in The Dragon. Things like the Duelist, Sentinel, and Witch, to name but a few. Many of them carried the disclaimer that they were intended as NPC classes only. Of course, being empowered by the LBBs to disregard anything I didn't want to regard, I immediately decreed them suitable for PC deployment.

These days, I can appreciate NPC-only classes. In fact, I can appreciate relegating certain "iconic" classes to "NPC Only" status. As I have made abundantly clear, I think true old school D&D only needs Fighting-Men and Magic-Users. They are archetypes. Dictionary.com defines archetype thus:

"the original pattern or model from which all things of the same kind are copied or on which they are based; a model or first form; prototype."

It is one of my jobs as referee to allow for character development to the point that a player can start with one of those two and end up wherever his imagination leads. If that means giving special abilities at appropriate times, that's what it means. Whatever fits within the character concept, campaign "reality", and player direction.

For NPCs, however, it is convenient to use subclasses, NPC classes and whatever else in order to bring the campaign to life and give it the necessary verisimilitude. While I would not allow a player to create a Paladin, for example, in my OD&D campaign, they may very well encounter a guy that can lay on hands, cure disease, and trucks around on a bad ass horse. Sure, from my perspective as referee, I know he is a Paladin. From the player's POV, or more accurately, the character's POV, that NPC is a paragon of virtue, something to aspire to.

In other cases, it is my contention that many of the other classes are just too narrow of focus, or constrained by restrictions, to make truly viable PC choices. Sometimes, it is just a matter of common sense. Why in the sweet name of Gaia would a Druid be a dungeon-crawling adventurer? For a very specific purpose with a definite goal related to nature or the balance thereof, sure thing. As a lifestyle/career path? Absolutely not.

Druids (to continue with the previous example) certainly have a place in the campaign world, as NPCs. Same thing for Rangers, Monks, and even Thieves. They should be for hire, pursuing their own agendas, not related to "killing monsters and taking their shit". A specific campaign arc that would highlight these agendas would allow for their inclusion, but the basic sandbox/dungeon crawl does not, in my opinion.