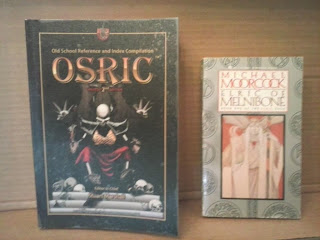 I received my copy of the A5-sized OSRIC from Lulu yesterday. Here are some pics of it next to a standard size paperback.

It's a hefty chunk of book, no mistake. I love books that are complete in themselves, and have this smaller format. I still love the idea of having a complete game, and a set of dice, in a smallish box, imminently portable. I guess it's a holdover from my days with my original white box.

As an aside, I saw in a forum (I forget which, I also forget the date of the post) that the A5 is only available in print. 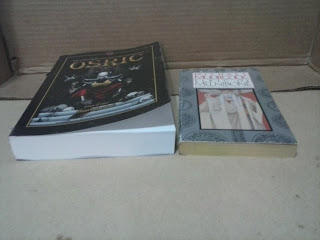 There is a free pdf at RPGNow. One of the great things (for me) about the A5 pdf is the Compiled tables at the back. There are 14 pages of tables, focused exclusively on character concerns. Attribute bonuses, all the class tables, spell lists, etc. The only DM tables are monster experience points tables. It would be a snap to cull these from the pdf and create a booklet of tables a la the Reference Sheets from the white box.

There are many fine reviews of OSRIC floating around. I'll just say this: it is a very complete game. Monsters stretch from page 192 to 320. Man-types get an extensive treatment, which I like seeing. The old letter-based treasure types have been integrated into the monster descriptions, which I think is awesome. There are extensive encounter tables, and one of my favorite things: detailed rules and tables for intelligent swords.

I've only briefly dabbled with OSRIC until now. Then I found a 40% coupon from Lulu and discovered this A5 format at about the same time. I'm really happy with this purchase. As much as I love LBB D&D and got my start with it, the vast bulk of my playing and DMing was done with 1st Edition AD&D, so this little beauty has been a real homecoming for me.

I will close by saying that Lulu did an awesome job. With the coupon the total cost for this was around $11, right to my front door. I ordered it Dec 22, received the email that it had been printed and was being shipped the 23rd, and received it the 28th. Totally awesome. Plus the geek factor of knowing that this particular copy was printed specifically for me. How sweet it that?
Posted by David at 9:02 AM 2 comments:

I have this idea. It involves modelling an increasing fighting capacity beyond the improvements on the "to hit" matrix and improving hit points. I am calling it Combat Prowess. It also goes fist-in-glove with a basic critical hit system. In a nutshell, a critical hit is basically scored on a to-hit roll of a natural "20'. In this case the attack does maximum damage. The Combat Prowess options to follow improve on this.

Combat Prowess
Essentially, Combat Prowess is a pool of points that may be spent to modify attacks in various ways. The options available are limited by level, as is the number of times they may be used in a given turn. The options are:

Most of them are pretty self-explanatory. It is worth noting that any points used apply to only one attack in a given round. That is not to say that points may not be spent on more than one attack, however. So, if you spend 1 point for an additional attack, giving you 2 attacks, you may spend one point on each attack for a +1 to-hit on each. In this case, you would be using a total Prowess of 3 points.
Effect C,  -1 enemy "to hit", applies to a single enemy, but it does apply to all attacks from that enemy.
Effect D, +1 to critical range, improves the critical range. +1 improves the critical range to 19-20, etc. A critical hit will be indicated by any natural roll within the range.
Effect E, Additional attack, grants the combatant an additional attack. Additional attacks are not modified by Prowess unless points are allocated specifically for them.
Effect F, +1d6 on a critical hit, allows an additional d6 to be rolled and added to the damage total in the event of a critical hit. Note that Prowess must be allocated for this effect before the attack is rolled, so it is a bit of a gamble, though the bet may be hedged by also allocating Prowess to Effect D.
Effect G, +1 Initiative, is added as a general bonus in group initiatives. That is, all bonuses from all characters are added together, then divided by the number of characters to arrive at an average Initiative bonus. Of course, in an Individual Initiative situation, it is added directly and unmodified.

Prowess is gained differently for each class. The following table illustrates when each class gains points, which effects they are eligible to employ, and how many points may be allocated to a given effect each turn.

* The number of times a letter appears indicates the number of points that may be allocated to that effect in a given turn. For example, a 7th level fighter has 4 Prowess points, and access to effects B, C, and E. In any given turn he may spend 2 points on A, 4 points on B, 2 points on C, 2 points on D, or any combination not exceeding the total of 4 points.

I hope this isn't too confusing. It is one of those things where I know what I mean by all of it, but it isn't that easy to communicate. My goals here are twofold:

Lastly, I want to reiterate that I have no group, so these ideas are untested. I'm not a number-cruncher, I eye-ball these sorts of things and just do what "feels" right to me. As always, I welcome comments and feedback, especially from the mathematically inclined, who may have some insights into how these bonuses feather in with the "to hit" matrices and anticipated damage outputs, in the RAW.
Posted by David at 5:58 AM 8 comments:

Ruminations on OD&D: 3d6 In Order and Level Limits 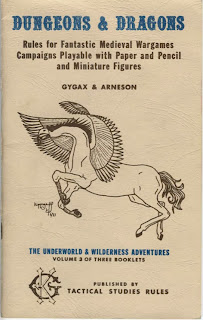 Now that the Christmas shipping madness has passed I might be able to get some writing done.

I have played with a LOT of people over the years that ignored these two simple guidelines. Of course, it was mostly AD&D 1st/2nd Edition mash-ups, but the principle still applies. I, myself, disdained them for a large chunk of my gaming life. It is only now that I have returned to my gaming "roots" that I really understand their intent. I will go out on a limb and admit that I think they pose a rather ham-fisted solution to a perceived "problem", but nevertheless, I do understand them, and the necessity for them.

They are demographic controls. Especially post-Greyhawk OD&D, with the introduction of Paladins, Thieves, and multiclassing, opened a flood gate of new classes and options that still continues. OD&D doesn't go to great pains to balance classes against each other. It is mostly achieved with the XP tables. Some classes are inherently more powerful, though, than a simple XP increase can account for. (ahem, Paladin, cough cough). So, the problem becomes "how to limit said class". Places strict attribute requirements and require 3d6 rolled in order. To play a Paladin you would have to roll a 17+ on Charisma, not just a 17+ in a group of 6 rolls. Other new classes have lower absolute requirements, but more of them.

So, if you don't have a particular problem with a party full of Rangers, Druids, and the inevitable guy who insists on playing a chaotic good assassin (one who has seen the darkness in his heart and now kills for a good cause), then you may safely ignore 3d6 in order and do it however you please. Seriously, there is no sarcasm in that. Maybe a plethora of supposedly-rare classes all functioing in a single group is not a concern for your game. All I'm saying is, I see the reasoning in it.

In the group I played with most often, we rolled 4d6, dropped the lowest and re-rolled 1's. Arranged to taste. no racial level limits, any race could multiclass. If we wanted to be a certain class but didn't have the stats for it, the DM would tell us to put the best number we had on the stat and he would raise it to the minimum.We weren't middle schoolers min-maxing, mind you. We were just very player/character focused. As a group we shared DMing and we all wanted each other to play whatever we wanted. We didn't want to force anyone into a class/race they didn't want just so we could be in line with the rules. Ironically enough, I was typically the only guy playing a straight-up human fighter.

It seemed that with our high-brow way of thinking, we believed that we, as players, had to have maximum freedom to "design" the character we wanted to play or else it wouldn't be fun. We never explored the possibility of finding the fun in a character that we "found" through random generation. I think we missed more than we gained.
Posted by David at 5:47 AM 10 comments: