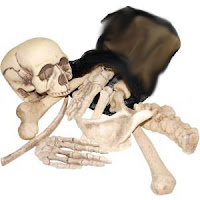 The Bag o' Bones is an enchanted canvas or burlap bag, securely tied. It is roughly "meduim" size, not small but not so large it would draw undue attention if tied to a belt. It rattle slightly if shaken, but is otherwise unremarkable.

The Bag o' Bones may be thrown at a target (range and modifiers as a Dagger). Upon striking the ground, presumably at the target's feet, its tie will fly loose and a pile of bones will spill out. The bones will form into a fully functional skeleton on the round the bag is thrown. The skeleton will be armed with a bone club.

This is a one-use item. The skeleton is in no fashion under the control of the owner of the bag. It functions as a normal skeleton. It will continue attacking should its first target be slain, moving on to a randomly determined target, including possibly the thrower or his allies. Note that subsequent targets are not subject to the Fear effect.
Posted by David at 2:42 PM 1 comment: