All Along the Watchtower

Alright, folks, here it is. The perfect D&D song. I love Celtic, New Age, Midnight Syndicate, and all that sort of thing for background ambiance as much as the next guy. This song though, is it.


This song is forever linked in a perfectly balanced trifecta with D&D and Fafhrd and the Gray Mouser. The very first F&GM story I read began with the duo manning a watch on a city wall. Need I say more? From the very first strains of the guitar, my mind is taken to a decadent city-state, ripe for adventure. The music has a certain dancers-in-a-bazaar sound to it. The lyrics were D&D before there was D&D. I mean, they sound liked the boxed text that says "Read the following aloud to your players".

It just doesn't get anymore evocative than this.
Posted by David at 8:02 AM 4 comments:

I have only a very narrow window in time to shove this through, so it will be rather spartan.

I was thinking of porting the career system from Barbarians of Lemuria to OD&D. I'm not sure right now about the acquisition rate. I'm thinking maybe 2 at first level with a bonus based on prime requisite. Then perhaps a point for improvement every three levels, and an opportunity to add a completely new one every 5 levels.

The mechanic for it would be roll 3d6 vs the relevant attribute (roll under), based on the attempt. That way creative players can seek inventive ways to play to their characters' strengths. For example, the Huntsman career should grant some benefit in a survival situation, which may logically depend on CON, but a player could accurately argue that INT is as important. Later, when trying to stalk some prey, the same player could make further use of the career, this time relying on DEX.

The way I see it right now, each point in the career subtracts one from the roll. Unusual circumstances could force the player to roll 4d6, and keep the lower or higher of the three, depending on whether the circumstances were beneficial or detrimental, respectively.
Posted by David at 7:31 AM No comments:

I'm sitting here this morning sifting through some OD&D forums. I see one about combat and Fighting Capability. At some point hit points were mentioned, and for some reason my mind swung off onto a tangent. I'm glad it did, because it gave me a new perspective.

A long time ago I accepted the notion that hit points are not just blood. They are sweat, fatigue, luck, divine favor, and simply the will to continue the fight. We've all had to accept that, in some degree, in order to make peace with D&D, no matter which flavor we prefer. Well, I have a new visually stunning example of exactly how that works. Without further ado, I give you . . . 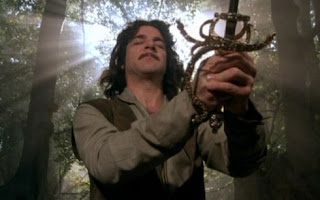 Remember the scene in the corridor of the castle, when our heroes were assaulted by Count Rugen's men? They rushed in and Indigo cut them down like the 1 HD pukes they were. One attack per man. Bam! Done.

Now, think back to the duel between Indigo and Westley. They never wounded each other (at least until Westley clocked Indigo with his pommel). Westley just wore him down. It took a while, of course, because they were both masters (with a decent number of hit points).

Remember, too, Indigo's duel with Count Rugen. He was stabbed, twice, but dug deep and kept going, because the fight was important to him. The wounds became inconsequential simply because of his will to fight, and his desire for revenge.

So, yeah, even though I've accepted the rationale behind hit points, these little a-ha moments that give me a fresh perspective on them are always welcomed.
Posted by David at 7:37 AM 4 comments: