I was thinking about Non-Weapon Proficiencies this week. I'm not a fan, as written. We used the shit out of them, but I never really liked them. They are too restrictive/narrow, especially when leveraged against the slots you have available for them. Plus, I was never happy with the idea that there were no clear guidelines on trying something covered by the NWP when your character didn't have the NWP. Finally, there was an odd side-effect of that: your character went from being virtually unable to perform a certain task (NWP), to performing it very reliably (if the relevant stat was high enough), with a single NWP slot expenditure.

If the modified roll is 20+, the check succeeds. So, it's basically a Target20 type thing.

There should be certain of the NWPs that aren't usable untrained. The remainder of the NWPs can be used untrained. In this case, if the NWP is on the character's class list, add the relevant stat mod, otherwise, the only mods are situational.

My friend, Rick, had his own campaign world. It was one of those things that was in development before he found D&D. Needless to say, it was deep and rich some 25 years later. It was its own thing. Rick bent D&D to his world, rather than his world to D&D. One thing I learned from many adventures in Rick's world: never, and I mean NEVER, fuck with anybody that was travelling alone. I called it the Rule of One, and much to my honor, it became a permanent part of the lore of his world.

The thing is, it can be hard to run games with 1 DM and 1 player. Far too often, they end up being one PC and a retinue of NPCs that the DM determines vital to success. The flip-side is a game that really is one character, but it means running from a lot of encounters. Neither is very satisfying. 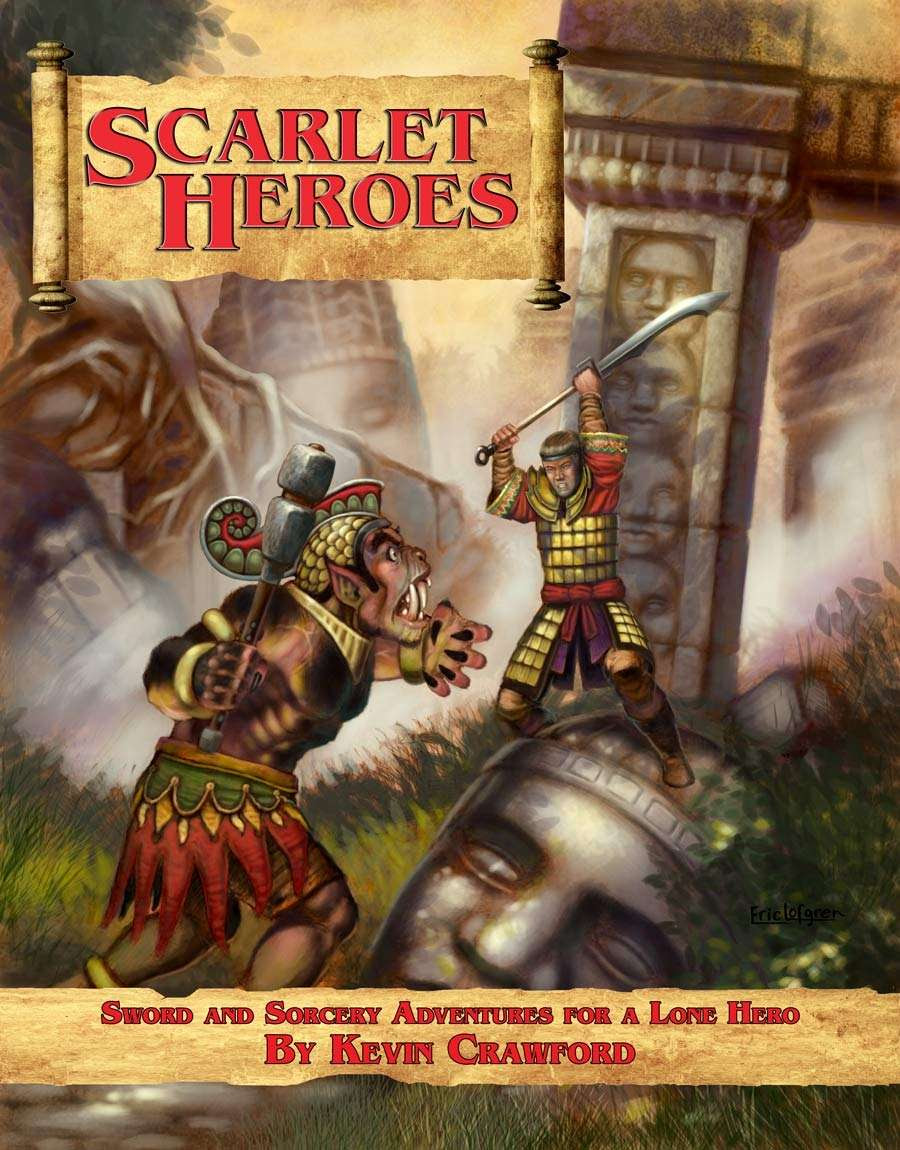 From the brilliant and prolific mind of Kevin Crawford, aka Sine Nomine, Scarlet Heroes offers a method for invoking the Rule of One in your games.

Scarlet Heroes starts with a chassis of B/X D&D. Sort of. It feels an awful lot like B/X, but when you get into the nuts and bolts it bears more of a philosophical resemblance than an actual one. It has the traditional six stats we all know and love. It has the B/X bonus scheme. It has the "core four" classes. The main four races are represented, as well as the Shou from the included setting. So far very B/X.

Now, here's where we start shifting our perceptions, because that is all that is really going on here. We still have hit dice, hit points, and weapons doing variable damage. You can take any D&D weapon not already on the equipment list and drop it right in. The difference is in how the numbers are used in Scarlet Heroes. For foes, monsters and mook-types, hit dice are hit points. So, a bandit can take one hit. A garden variety zombie, 2 points of damage. PCs have normal hit points and important/legendary foes may have hit points, as well.

Damage is determined differently, too. Weapons are still listed with their traditional damage ranges, 1d8 for a long sword, for example. However, rather than simply rolling and deducting that number from an opponent's hit points/hit dice, the roll is checked on a damage table. Thus:

This little table, and the damage dynamic that it applies to, is at the heart of what makes Scarlet Heroes sing. The other thing that really makes it work is the Fray Die. I love the Fray Die. It is a free damage roll PCs make every round, just because it is dangerous to stand too close to them. How awesome is that?

So, that small shift in the perception of hit dice/points and damage is pretty much the foundation that all the rest sits upon. There are other changes that essentially amount to making PC's better able to function alone. Traits add a skill-like element that can be used to mimic certain class-like abilities. There is a Defy Death roll which players can make when they reach an impasse that their character isn't able to handle. It becomes more difficult and dangerous every time the player relies on it to get the character out of a jam, though.

Scarlet Heroes is a complete game in and of itself. It includes everything you need to play, including monsters, magic items, and a taste of the Red Tide setting. There is also an extensive chapter on creating adventures, which includes a good-sized list of adventure tags, which are used in the construction of adventures. There is also a nice section on truly solo gaming, no GM needed.

I want to say one other thing about this before I wrap this up. This doesn't get mentioned much in any of the things I've read about Scarlet Heroes. The spell lists are totally awesome. They are loaded with new spells and new twists on old spells. He provides great, very evocative new names for all the spells. Some of them are really unique and could make a separate supplement of their own.

PS I forgot to mention, the system is suitable as is for one or two PCs. More than that and it gets too easy. However, it is a fine system in its own right, and by simply using hit dice/points and damage in the traditional manner, it could serve as a wonderful vehicle for a group of PCs.
Posted by David at 8:01 PM 2 comments:

A Teaser (and we know how those go)

The release of issue #1 of The Sandbox from Sine Nomine has me totally jazzed for Mr Crawford's work for the nth time. My gaming ADD drags me away from it as readily as it drags me to it. The plain truth is that Sine Nomine's line covers all the bases I like in gaming: fantasy with Scarlet Heroes, Red Tide, and An Echo, Resounding. Of course, he has sci-fi covered in spades, including Darkness Visible, which also covers the espionage genre. Then there is Other Dust, which scratches my post apoc itch. There is also a number of free supplements for these titles. In short, if my ADD would leave me the hell alone, I could happily spend all of my gaming time with Sine Nomine titles and products.

Recently I binge printed most of my Sine Nomine pdfs. Very soon I'll finish up the ones I missed. So, it is my hope (I won't use the "plan" word) to be able to write at least a brief post about all of them. I'll head each post title with [S]ine [N]omine, so that if these titles aren't your cup of tea, you'll know what's coming.
Posted by David at 7:54 AM 2 comments: