I have posted before about various setting ideas. I have also posted about my world, Aranor. I first started mapping and writing about Aranor in 1990. I have written quite a bit in the last 23 years, unfortunately much of it is mutually exclusive. My gaming ADD takes a heavy toll on any setting development I am involved in. I am sad to say that I typically try to fit Aranor to the rules, rather than the other way 'round.

My vision (if it could be called such) has always been more tilted to swords and sorcery, but with some higher fantasy elements. Not many, but some. Whenever my attention shifts, it is inevitable that I will drag Aranor into it sooner or later. So it has happened with Dungeon Crawl Classics. I am hoping that I can settle on DCC and really get some deeper, sustained development going. The particular conceits of DCC seem to really fall into line with what I want in Aranor, so this should work well. As long as my attention doesn't drift.

With all that out of the way, I want to offer a new version of a particular region of the map. Below is a larger, hand-drawn, map of Northern Calanthas, one of the main areas. The black box indicates the area detailed in the map that follows. 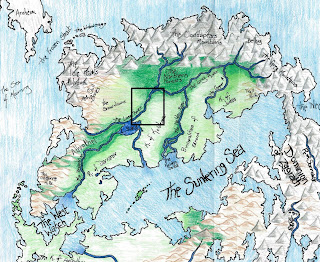 Below is the detail of the area. The principle adventuring setting is the town and keep of Ravenhold, located in the 4-hex mountainous area to the SE of the lake. I haven't placed settlement symbols or names on the map yet.

As you can see, I rendered the map in the style of the old Judge's Guild maps. I thought it made a nice fit for a DCC setting. Besides which, I just like that style. It is very evocative and nostalgic. I did it using GIMP and some patterns that I downloaded from here. 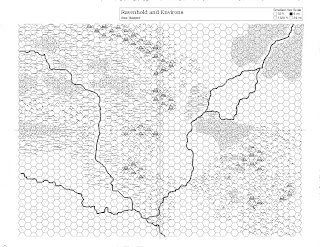 The Object of My Desire

It came while I was at work yesterday. The big box was waiting patiently when I got home. It was glowing with an eldritch light and a chorus of angels was faintly heard. 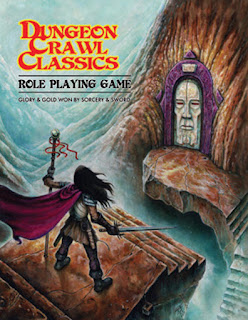 As I said in the last post, I have the pdf printed and in a binder. Now, I typically do not print full-page art when I print pdf's. It saves ink on the home printer and money at Office Depot. Let me just say that the physical object that is DCC is a wonder to behold. There are numerous quotes in reviews about "oozing old school", which I could relate to, based on the prose of the pdf. Seeing the entire package, though, art and all, bound in that colorful, shiny cover, really took the oozing to another level. I have not been this excited about a single-book RPG purchase since Warhammer Fantasy Roleplay (1st edition), 26 years ago.

I am now considering planning to have the spell tables bound into their own booklet for my reference. I will also get the "rules" bound for players' reference at the table. That not only helps keep the wear and tear down on my new book, I think it will also make the game less intimidating for new players. I've already printed out these reference sheets (thanks Jeremy). The essential player rules are relatively short and simple, so distilling them from the 488 page tome should help ease new players into the idea of such a gonzo style of play. I'm thinking of getting them all comb-bound, for a real old school ambiance.
Posted by David at 5:10 AM 4 comments:

Email ThisBlogThis!Share to TwitterShare to FacebookShare to Pinterest
Labels: DCC

Preface
It is indeed "Bated Breath". I looked it up and this is what I found.

On With the Show
I don't like Father's Day. It is a privilege to be a father, it is its own reward. I don't need a day to "honor" me for it. However, my wife informs me every year that I have to not only humbly accept the fact that our kids want to honor me, I also have to designate a gift. (They claim I am notoriously difficult to buy for. Posh! I say. Get me an RPG or action/historical war movie and call it done.) So, last Sunday morning I duly ordered Dungeon Crawl Classics Core rulebook. I ordered it off Amazon. The particular seller I chose claimed to ship within 24 hours, the chief reason I chose them.
I didn't really expect that to happen, since I ordered on Sunday. I didn't expect it to go out Tuesday, either, which it did. I was really hoping to have it by yesterday at the latest, so I could get some quality time with it this weekend. Alas, it was not the case. Of course, I have the pdf. I even have it printed and in a binder. I want to hold the book. There is a certain je ne sais qiou about having the real deal. A certain mystique of the bound tome.

Thus it is that I wait. Tomorrow must surely be the day. In the meantime, in addition to the binder, I have been catching up on forums and the like. One thing that strikes me in a lot of the forum threads is the brewhaha over the dice. There is only one die type that can't be fully emulated with the dice already in any roleplayer's collection. The d7/d14 is the lone hold-out. I will order 2 or 3 d14's, half them for d7 rolls, and call it a day. In the meantime, I'll just use a d8 and re-roll 8's. Yet something so simple is very polarizing for a lot of people.

Another head-scratcher for me is all the carrying-on about "all the tables". I know it is a lot of tables, but how many are used at the same time? In the same turn? In the same encounter? I'm sure there will be occasional times when more than a couple are in play, but I suspect not all that often. Couple that with the fact that a lot of them are more "player focused", which evens out the responsibility for their use. Give each player a copy of the relevant crit table for his race/class, spell tables as appropriate, and the "table burden" is much more evenly distributed.

Back to waiting, pondering, and reading about the game, while I await the tome.

Some of you may remember certain comments I made concerning Crypts & Things, by D101 Games. I did, and still do, disagree with the notion of taking ideas freely given to the gaming community and making a proprietary title from them. I believe that some sort of free pdf should be made available, based on the spirit that made the game possible in the first place. Without the good will of Matt Finch and Akrasia, there wouldn't be C&T. I understand that the author developed an original setting,tweaked monsters and spells to better reflect the genre, and added descriptive fluff to be more evocative. If a free pdf that didn't include such things, then so be it. Not including that sort of artistry would be understandable.

Why have I decided to bang this tired old drum again? Because I broke down and bought the pdf of C&T. Philosophical differences aside, I love what Newt Newport has done here (so far. I haven't finished reading it yet).In this game, I have found something I have long wanted: a swords & sorcery D&D. I love Barbarians of Lemuria, I think Legends of Steel is a good implementation of the genre, but I've wanted Dungeons & Dragons swords & sorcery. I've tried many times, as most of you know, to develop my own house rules. Some of mine are amazingly close to some of Akrasia's, but mine never gelled like his do, taken as a whole. Plus it is one thing to take his rules and paste them into White Box, it is quite another to have them baked right in.

I had thought about doing one of my quasi-reviews, because there really aren't that many. The reviews that are out there (which are linked to on the D101 webpage) all say pretty much the same thing. "Great game", "excellent s&s rules", "magic system rocks", "best barbarian class ever", "really creepy monsters". Well, the fact is, that sums it up. It is a great game, and if I did review it, I would be saying the same thing all the others have said.
Posted by David at 4:35 AM No comments: