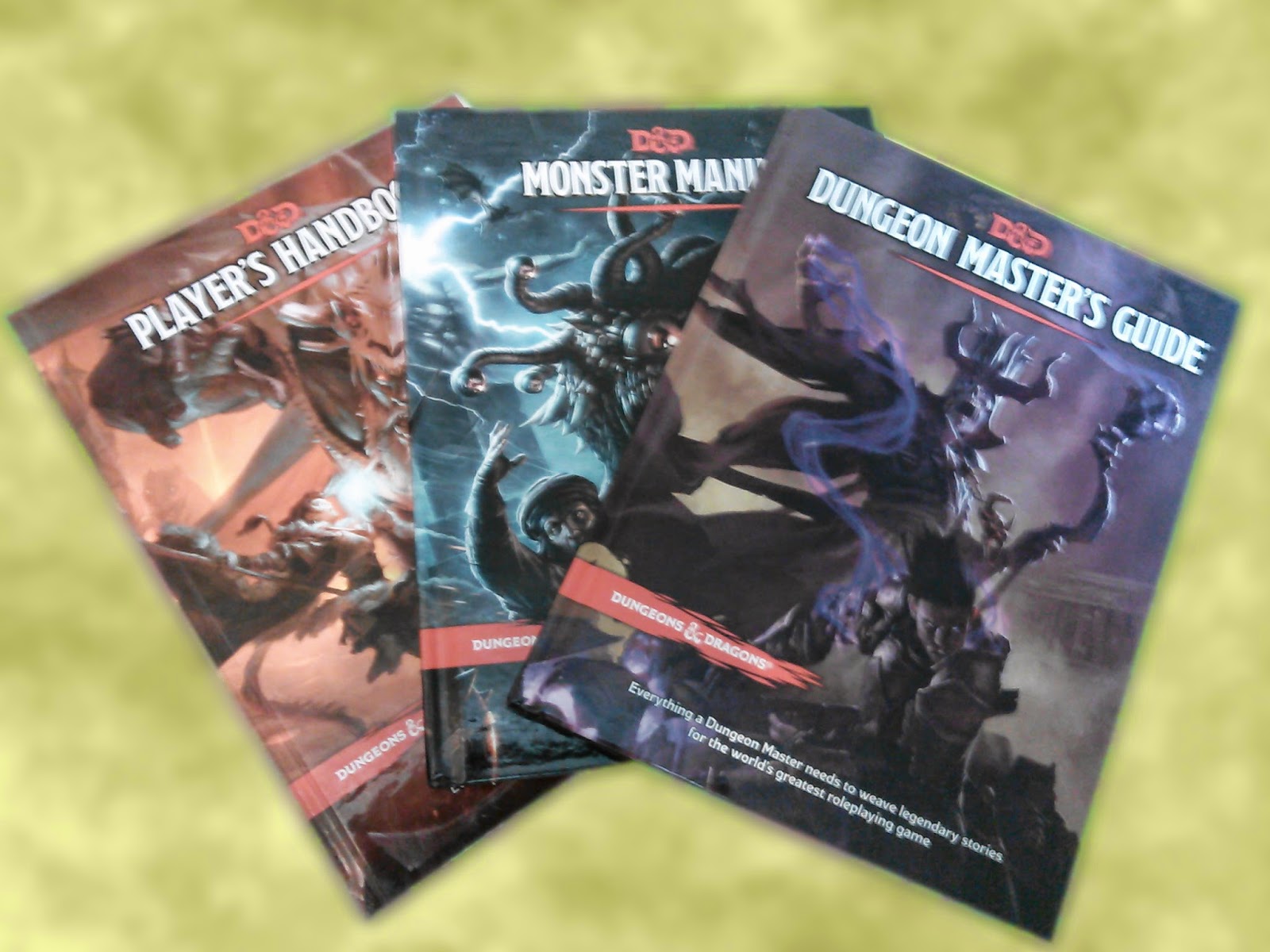 Without further ado (and in the order I received them) . . .

This is simply awesome. Monster Manuals are odd beasts (sorry). They are slam full of ideas, but reading them doesn't really flow. Each monster is almost like a chapter, not always related to any other chapter. The art, and graphic design, are phenomenal. The write-ups are fantastic, giving each monster all the space it needs, and nothing more. I grew to detest the 2nd Edition Monstrous Compendium paradigm of "One creature per page". Some of them just don't need that much space. The stat blocks also appear very user-friendly. The stat-blocks in 3.x/4E intimidated me somewhat.

Bounded Accuracy is evident here, in the monster ACs and bonuses to-hit. For example, from the d20 SRD, an Ancient Red Dragon (because, why not?) has the following AC and to-hit bonus: AC 39 and Attack Bonus of +44. The 5th Edition Ancient Red Dragon has an AC of 22 and an Attack Bonus of +17. Of course, there are other points of comparison, and factors that will influence the relative hazards, but I think this is somewhat telling. When we're talking about characters gaining a class-based maximum of +6 to-hit, an AC of 22 is frightening, but not a death sentence. A character could conceivably hit such a beast without benefit of any magic weaponry or other aids. Not advisable, but conceivable.

This speaks to a desire I've had for a while for my games. Characters who are butt naked badasses. They have the potential to be serious threats, sans magic items. I blogged about that in this post. It also means that creatures remain viable threats further into the campaign.

I was already familiar with most of what's in here. The system proper is in the free Basic pdf. This book has more options for characters, mainly in the form of expanded class selection, and optional Feats. I'm not trying to review anything here, or even give details, so this is very subjective. I'm just as happy with 5th as ever following this release.

I haven't really read all of the classes. I like what I have read, though. The Paths idea is awesome, and incidentally, something I postulated in this post. That post is dated from a point over a year into the playtest, and I'm not suggesting that my idea for it was original. My point is that I like the concept.

I love the power curve here, too. The max bonus a character will have to do anything, based solely upon class, is +6, and they don't reach that bonus until 17th level. Of course, there are still bonuses based on stats, and other factors.

Backgrounds are awesome, and make excellent hooks into a campaign. I even like the implementation of Feats (at least on paper). They seem to be a gateway to a more limited (and easier to manage mechanically) form of multiclassing. There are feats that allow any class to learn some magic, or cast ritual spells. Weapon and armor feats for the martially challenged. Skill feats to allow non-thieves to dabble in larceny. All in all, a convenient way to customize a character without having to go all-in with a whole new class.

On a slight tangent, I like this for another reason. I have to admit that I liked the concept of prestige classes. In practice it became a min/max holiday. A frenzy of taking a level here and a level there for the sake of a certain combination of abilities. Meh. This is much better implemented and tightly focused. Many of the feats give almost a prestige-class vibe, without the need to have a character with 4 classes just to achieve a particular vision.

This one blew me away. This book is a work of genius on every level. I don't even know where to start. It is like reading the 1st Edition AD&D DMG, if it was written in 2014. It has so many of the things from the original that screamed "DM!" It even has the old Forms of Government table and descriptions. Totally awesome.

The chief way it differs from its predecessor is that the original included tons of advice on adjudicating your campaign. This was vital when you're talking about a game that operated on the concept of DM rulings being part and parcel of every session. This DMG focuses more on conducting the campaign, rather than handling the mechanics. Set the dials and switches, and start the engine. After that, it's all about the story. The rules hum quietly in the background, always ready to smoothly rise to the fore when needed.

On my very sketchy first readings, one of the things I think is pure gold is Appendix A: Random Dungeons. Tables for generating the maps of a dungeon level, as well as "backstory" type details. My favorite tables are the ones for random environment things. Sounds, smells, room furnishings, random books and scrolls. All completely awesome.

The other part that immediately caught my eye was Chapter 9: Dungeon Master's Workshop. This chapter is loaded with optional rules, many of which have their origins in the playtest documents. So, if there was something you liked that was cut from the playtest, like Proficiency Dice, chances are it is in this chapter. The thing I really like about this chapter is that these options are fully realized. This is not a few words of vague advice, like "Rather than static proficiency bonuses, you could roll a die based on level to randomly determine your bonus." No, no. It is fully spelled out, including how it changes the feel of things. Also included in this chapter are optional rules for Honor and Sanity, both very welcome additions.

By the way, even if you plan to run a campaign using the free Basic pdf (which is completely viable), you should strongly consider getting the DMG, at the very least. With the advice in it a Basic campaign will seem anything but basic.
Posted by David at 12:24 PM No comments:

Call off the search. I have escaped the clutches of the dire time-villain known as the Christmas Peak.

Quick recap: I've been working 70+ hours per week since the beginning of November, so my reading time has been highly restricted. I've read some, but more as some relaxation before collapsing into a fitful slumber. I've briefly touched on several titles. My gaming ADD has an absolute field day under these conditions. Probably the runner-up for Biggest Interest Piquer (I made that word up, it isn't misspelled, so don't look) was  . . . 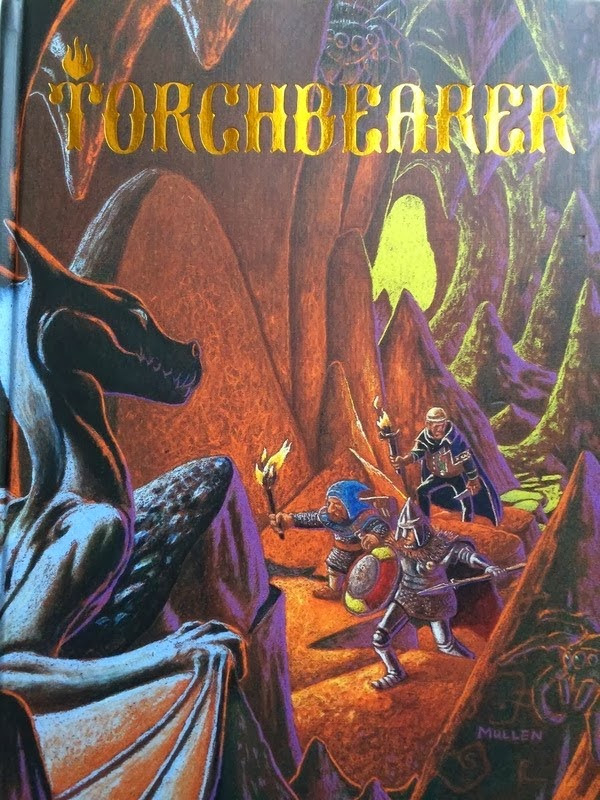 I love to read and think about Burning Wheel. I also love the hack Luke Crane came up with for Mouseguard. In practice, BW is too story-oriented for me, while paradoxically, it is extremely crunchy. A lot of moving parts, which depend on each other to a (much too) large degree. Torchbearer, though seems like viewing BW through a D&D lens. I didn't read all of it, let alone play it, but I did like what I did read.

Which brings me to the current focus of my creative energies . . .


So, I am fully, firmly, and committedly in the 5E camp. I haven't dug too deeply into my hardbacks yet, but I have previously been reading the basic rules pdf. I want to give my initial impressions, though. Let's get started, shall we?

Don't rally the villagers and dole out torches and pitchforks here, but I ordered these off Amazon. I don't have a local FLGS. There is a comic shop that probably carries it, as well as a shop that caters almost exclusively to Games Workshop miniature guys. They are both rather tightly focused on their core market (read: elitist), so I don't frequent them very much (read: not ever since the first time). My only other options were Books-A-Million and Barnes & Noble, which are every bit the chain-store giants that Amazon is, and they don't discount shit. How does this equate to the "Nostalgia" heading?

Well, as a younger man, I had to save allowance for D&D swag. I also had to either wrangle a ride to a game store, or order by mail. (Incidentally, I acquired a set of those old soft plastic dice by mail, as well as Eldritch Wizardry) That meant time spent in sweet, maddening anticipation. Waiting for my shipments from Amazon (they were all shipped separately), was very reminiscent of that anticipation. It was an awesome way to get into these books.

Taken as a Whole

My feeling at this time is that this really is a melding of all that has gone before. 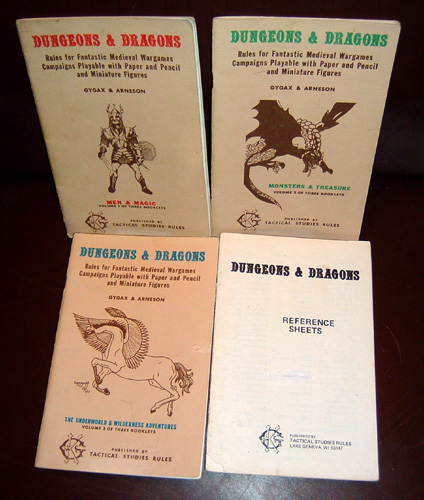 It has the obvious roots in the LBBs, shared by all editions, in the concepts of the six stats, hit points, classes and levels. 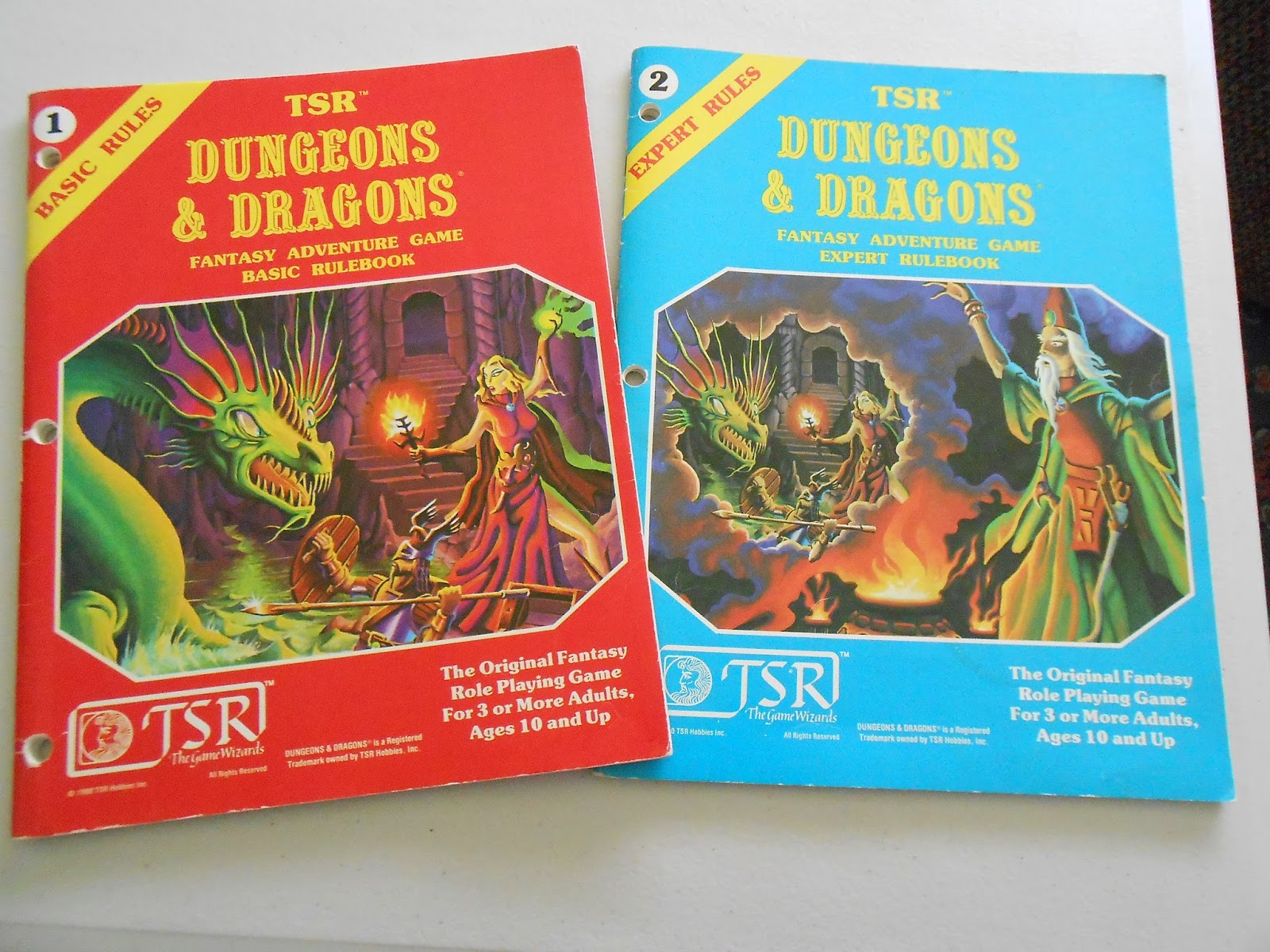 Philosophically, it has the smoothness of B/X in its operation, ease of play, and ease of DMing. 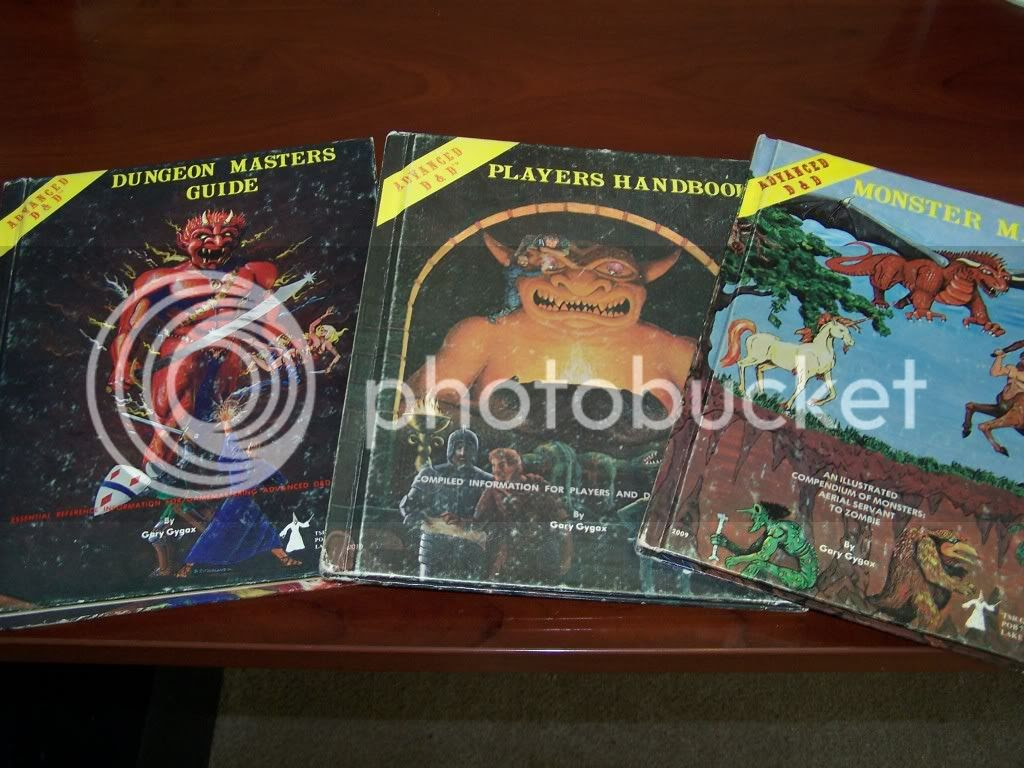 Its debt to AD&D I will discuss in the DMG heading.

From 2nd Edition we get kits, streamlined, balanced, and standardized in the form of Backgrounds. This new edition seems to evoke 2nd Edition to me somehow. The move from the baroque language of 1st Edition to the smooth, easy-reading of language of 2nd Edition is mirrored here. 5th Edition is much more pleasing to read than either the law-tome known as 3.5 or the tech manual of 4th Edition. It also uses the concept of colleges of magic and clerical domains, first appearing here. 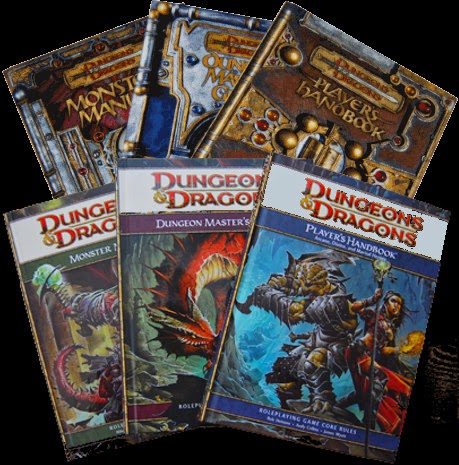 From 3rd and 4th it draws concepts that unify and streamline. Ascending AC allows a much more unified mechanic. In a real way, the to-hit roll simply becomes another skill roll. The three saves being based on stats, found in 3.x, became the six stat-based saves of 5th. The idea of Feats was born in 3.x. Their appearance in 5th is much better implemented, and entirely optional.

4th even offers useful tidbits. The "rest" structure is alive and well, which I do like (blasphemy? Perhaps). One of the most irritating disconnects in D&D, for me, has always concerned hit points. On the one hand we're told the bulk of the damage a character takes represents minor nicks, close calls, and general fatigue. Yet, if depending on natural healing, it could take weeks to recover from a couple of fights. I have always liked the idea of regaining a chunk of hit points following a chance to catch your breath, take a pull from a wine flask, and slap on a bandage or two.

So, that is my thumbnail sketch of what got us here. I think I'm going to split my initial impressions into another post. I'm going to do it right now, so this isn't going to be one of those time I tease you with something I never deliver. Promise.