I'm not kidding. This is the post wherein I will likely hurt some feelings. I may even loose some of the readership I have left. I hope not, but there's something I'm tired of, so here we go.

In this country we have gone so far in our collective desire to not offend fringe groups that we (almost) de facto vilify any opposing views. I want to address two specific cases in point, where this intersects with gaming.

Point #1 - The Objectification/Exploitation of Women

There are some fairly vocal folks in this hobby, curiously enough, mostly men, who decry women in fantasy game art being displayed in provocative ways. I have read reviews where the reviewer wouldn't recommend an otherwise good product simply because there was a bare female midriff on page 132 and a glimpse of cleavage on page 243. Bared and oily skin is a traditional trope of much of the imagery associated with fantasy gaming. It isn't strictly necessary, look at Lord of the Rings. But sometimes it does add to the experience. There's a reason they tapped Arnold to play Conan and Sandal Bergman to play Valeria. It wouldn't have been the same with Mike and Molly.

A quick glance to the right will show you where my gaming head is most of the time (ADD not withstanding). There's plenty of cheesecake AND beefcake in C&C. I love all of it. It's funny to me that the same people that rail against the cheesecake don't seem to have a problem with the beefcake. They'll sometimes  comment about it, but will rarely, if ever, allow beefcake to factor into their review.

Here's a couple of examples from C&C that I like: 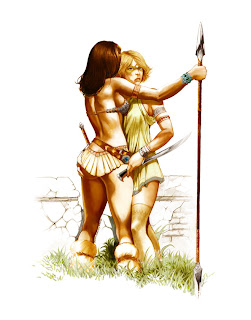 Finally, I want to say to anyone who is offended by the objectification of women in fantasy roleplay art: They're drawings and paintings. They are not real women. No one was objectified in the making of this post.

I'm a Southern Conservative, in case that wasn't already obvious. I'm not a narrow-minded bigot, but I do have my opinions, views, and values. I was having another ADD dalliance with D&D5 recently, when I discovered this little nugget:

You don ’t need to be confined to binary notions of sex and gender. The elf god Corellon Larethian is often seen as androgynous or hermaphroditic, for example, and some elves in the multiverse are made in Corellon’s image. You could also play a female character who presents herself as a man, a man who feels trapped in a female body, or a bearded female dwarf who hates being mistaken for a male. Likewise, your character’s sexual orientation is for you to decide.

Firstly, I'm fairly certain that anybody with enough imagination to play D&D in the first place could figure this out. Even if they were a little unsure of things going in, by the time they get to page 121 in the character creation process, they should have a handle on the notion that they can imagine pretty much any character they want to.

It just pisses me off that we are nearly constantly exposed to the notion that these fringe groups (population-wise) get so much damn play in our society. "Call Bruce Jenner a hero" "Use whichever bathroom you want to" "Make me a cake or I'll sue." Of course, if you're more about traditional values, or even the concept of liberty that grants you the right to your own opinions, you're a narrow-minded bigot.

Why do these things get exclusive coverage anyway? Why are there no lines about settling down and starting a family the old-fashioned way? And that crap about Corellon Larethian is MADE UP. And, by the way, what kind of game are the designers expecting people to run where sexual orientation even matters?

Bottom line: Our youth are constantly exposed to "alternative lifestyles" without any counterpoint for traditional lifestyles. Bruce Jenner is not a hero. He's a guy that ingested large doses of estrogen and put on a dress. He didn't save a life or help found this country. This country was founded by men who weren't afraid to be men and do man shit. George Washington didn't have a sex change and Thomas Jefferson didn't have two mommies. If somebody wants to transgender or be gay, then go for it. Just don't vilify me when I don't want to be assaulted with it morning, noon, and night.
Posted by David at 6:07 AM 15 comments: