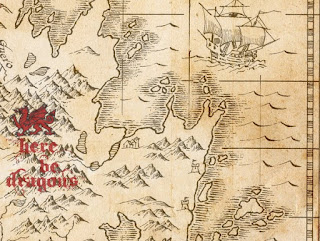 I've had an idea. It's actually an amalgam of several ideas, plus a dash of my own, and given a good stir.

I've been giving Judge's Guild Wilderlands of High Fantasy a good look. I've broken Map One up into four pieces and zoomed each one up to a full page. That give me a map of close to 15" x 20". I also have one that is about 10" x 16". The larger one I am coloring with pencils (I'll scan and post when I finish it, should be the next couple of days). The 10" x 16" I plan to use for wandering encounters.

My criteria for a Wilderness Encounter System are:

So, here's the raw idea: Use a different die-type for each aspect of the encounter roll and throw them all at once. BOOM. Here's my first breakdown, subject to change:

Occurrence 2d6
This roll will determine if an encounter occurs and the type (Boon, Creature, Obstacle/Event, Signs/Portents, Special)

Signs/Portents 2d8
Omens, shrines, totems, and the like. More flavor than anything else, to re-enforce the character of a particular region, but these results may have in-game effects

Special 2d10
Something odd, unusual, and/or unexpected. Typically some sort of abandoned/forgotten structure, some of which may be suitable for exploration


Now, I realize that's a fistful of dice to be throwing down at once. Think about this, though: Do it behind a referee screen and your players will never know what the hell is going on. They will be completely clueless, and therefore paranoid, about the occurrence of an encounter, or the nature of any encounter. All they'll know is the thunder of 12 dice hitting the table at once, and the completely helpless feeling as they have no idea which, if any, of the rolls has the potential to ruin their day . . .
Posted by David at 6:32 AM