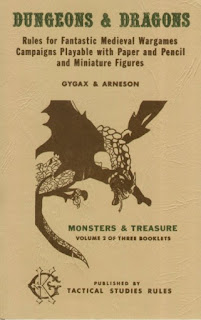 This booklet leads off with two comprehensive reference sheets of all the monsters included with D&D. There were about 50 in the beginning and some were quite different than they were in later editions. The presentation was also vastly different.

The pertinent stats, minus special abilities, were all contained up-front, in the reference sheets. The descriptions were quite short. Specifics were left to the imaginations of individual players and referees. There were no lengthy entries detailing the proper habitat, eating habits, or the like. No highly detailed pictures showing you just what the creature looks like.

I like this approach. It is my long-held contention that once something is in writing in a game, it is law in the minds of the participants, for good or ill. If a referee isn't told exactly where wyverns are likely to nest , he'll make it up. He may decree that there is a nest of wyverns high up in an ancient oak. Sure, he may worry if he's doing it "right", but he'll decide anyway, and the game will go on. On the other hand, if the Tome o' Monsters states unequivocally that wyverns only ever nest on rocky crags, then our referee will be at a loss. Of course, he can override the rules, but what complications may that cause, he worries. Better to scour the Tome for a creature that does nest in oaks. I know that may sound silly to a strong-willed referee, but it's not that far-fetched.

Even though the descriptions are brief, there are differences in several creatures. Here are a few:

Skeletons have 1/2 HD, Zombies have 1HD. Which means Fighting-Men shouldn't have too much trouble with either of them.

There is one iconic monster that has changed not only mechanically or descriptively, but philosophically. It has changed so much, in fact, I think it deserves its own post . . .
Posted by David at 11:03 AM

Email ThisBlogThis!Share to TwitterShare to FacebookShare to Pinterest
Labels: D and D, Monsters and Treasure