A lot has been made about all the tables in DCC. The opinions vary from bleakly negative to wildly positive. I figured I would toss my 2 coppers into the pot.

On first blush, I thought they looked like great fun. The "over the top" aspect looked like it could bring some laughs, not to mention some moments of genuine relief when an insanely high roll turns a disaster into a victory. Of course, it can go the other way, too, but that's the stuff of high drama.

Then, I started thinking about it. There is a table for almost everything. That can lead to a lot of table look-ups, which has the potential to slow a game down. Adding to that is the fact that most of the high drama moments I mentioned could having the energy sapped from them by a drawn-out table sequence (Spell Duels, I'm looking at you).

Now, I'm sure I've left you with the impression that I'm no longer a fan of all the tables. For a brief moment that was true. I had started buying in to all the nay-sayers and my own apprehension. I had another epiphany, though. The tables are used in relatively small doses. For example, every single spell has its own casting table. That comes up to over 220 pages, just for the Wizard spells. There are 5 pages of critical hit tables just for characters. The thing that I realized is that very few of the tables are actually necessary at any given time. A Wizard character is only going to know a small handful of spells. A character is only going to need one critical hit table at a time, and most of the classes will only ever need one critical table. Once that realization had dawned on me, I was off to the races with DCC. 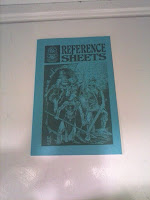 As I mentioned in a recent post, I printed out the reference sheets from People Them with Monsters. I finally printed them out, with a twist. I found some blue paper laying around and printed the cover on that. It gave  it a certain old school vibe of its own, printed in grayscale on a sheet of solid color. I also printed What to Roll, which I used for my back cover.

I also did a mod on this limited edition cover to use as a cover for my spell tables booklet. If I ever do run the game, especially on a regular basis, I'll have a copy of the Tables for the players, plus one for my quick reference. The spell tables will be mine. The players will learn the extents of their spells through trial-and-error.
Posted by David at 7:41 PM