I was meandering around the net this morning and stumbled across some mention of Legend. It is Mongoose's open-source version of RuneQuest. Mongoose did not renew their license for RQ after RQ2, instead opting to do their own thing with it. It is really cool that they went open-source with it. The coolest thing, though, is that the core book is available for $1 at DriveThru RPG. I snapped that up when I first read about it. I even had it printed. Then I promptly forgot all about it. Until this morning.

In a nutshell, if you like RQ, you will likely enjoy Legend as well. Sure, there may be some points of friction, but it is still the same basic percentile system purring away under the hood. I'm no authority on RQ. It was the equivalent of an Epic Quest for me and my buddy John to cobble together enough hand-written notes and photocopied pages to play D&D. We weren't about to abandon all that hard-won loot for another system. 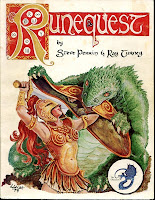 In later years I wanted to try RQ. A roommate I had at one time had the 2nd edition rules and we tried to make up characters. By the time he got to the part about me being able to join a guild and take out a student loan (which is exactly how his description hit me), I was glassy eyed. This was when my gaming circle was into AD&D and had been for years. We could go from "Hey, let's play D&D" to a finished party of 1st level wanna-be's in no time. So, that flirtation with RQ was short.

Then, Avalon Hill came out with RQ3. Little known secret: My gaming career started with Avalon Hill wargames. Tobruk was an early favorite, along with Tactics II and Blitzkrieg. Anyway, I liked the look of the blurb on the box, and I was an Avalon Hill fanboy. Unfortunately, my group was D&D or die, so RQ3 never really got any traction. I bought a lot of the supplements (because that's what I do), and I really liked the feel of the game. It seemed to me to be very clunky (based solely on reading), but I broke it out every now and then to see if my perceptions had changed. I thought Glorantha was really interesting, even though there were a few things that offended my sensibilities. I'm not sure if the things were "true" Glorantha, or part of Avalon Hill's take on it. Either way, by and large, I loved it as something to read and feel inspired by.

Which brings me back to Legend. As you may glean from this rambling monologue, I have wanted to like RuneQuest for a long time. So far I am happy with Legend. I haven't gotten very far into re-reading the pdf, but I like what I'm seeing. Plus, the pdf is produced in digest format, which I love. The cover (as seen at the top of this post) is very sublimated, which makes reading the game in public much more "stealthy". The core book is complete in and of itself. At least it is sold that way. It is well-supported, however, with several supplements (available in pdf, though not for $1, they are still reasonably priced). There is also a fairly active forum, located here.

For a slim buck, this is worth a look, especially if you're curious about RQ.