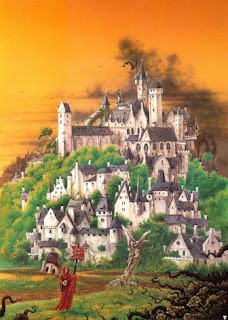 I posted some stuff a while back about setting Lamentations of the Flame Princess in the WFRP Old World. I have been thumbing through LotFP the last couple of days and that idea has resurfaced in my rather shallow mind. There are a few reasons why I think this is a good match and I just wanted to share as many as time permits.

First off, I want to make it known that this is not a perfect marriage. The Old world does have the iconic and so-called "evil races", goblins and skaven most notably. It is also littered with undead. I know this may be a blasphemy against the spirit of LotFP, but I don't see a problem with this. As long as the goblins and skaven are portrayed as "citizens of the world" (so to speak) and not as targets for player aggression, I don't see a problem. There are elves and dwarves, after all, so the inclusion of entire species of non-human societies is not without precedent, rules-wise.

What I do like so much about this notion is that it plays perfectly into Mr. Raggi's assertions in the Referee's Book that the setting be pseudo-historical and weirdly familiar. the Old World has that in spades. The human-centric lands, known simply as "The Empire", is a fantastic homage to the Holy Roman Empire, complete with Germanic names. Oh, yes, and black powder weapons.

Even better, this Empire is blanketed in deep, mysterious, and oh-so-dangerous forests. The civilisation (the proper British spelling) of the Empire exists primarily along the highways and river-ways. No sane person strays very far past the eaves of the forests. The Empire is also bounded by stark and forbidding mountains to the south and east, and dangerous seas to the west and north. Any and all manner of threats may issue forth from these primordial places, and the populace perceives these threats, real and imagined, constantly. The strange and macabre lurk in the shadows of the forest trees and among the mountain slopes, just out of sight, but always near enough to snatch a goat. Or small child.

LotFP encourages the use of unique creatures, each designed individually by the Referee. The Old World supports this seamlessly with its concept of Chaos. The forces of Chaos and Law are constantly at war. Chaos is destructive, unpredictable, and ultimately corrupting. Its very nature is to pervert and destroy the totality of Order that the forces of Law strive to achieve. Those who dally with Chaos or succumb to its allure and offers of power, often find themselves the subject of mutations, ranging from mild and unnoticable to outright hideous. Some are known collectively as Beastmen. They are all unique in appearance and powers. There are also agents of Chaos and Chaos cultists. Most of these appear quite normal and move about in society in normal fashion. By night they hold secret meetings, offer terrible sacrifices, and receive blasphemous "gifts" from their twisted masters.

This just scratches the surface of how LotFP and the Old World complement each other, but my time grows short. Perhaps I'll delve a little deeper in future posts. For now, I'll leave you with a map of The Empire. 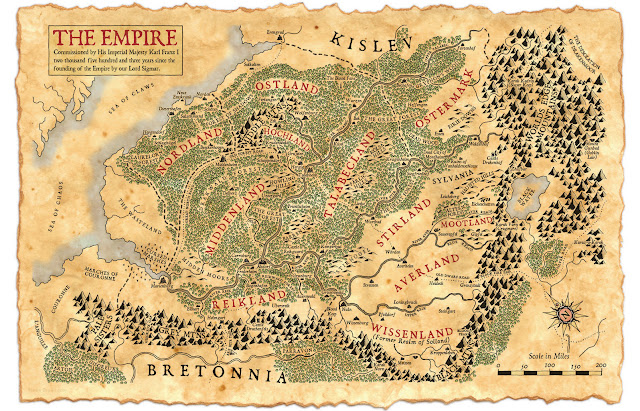