So, the D&D Next playtest didn't happen, and doesn't appear too likely. Naturally, my attention turned to something else. 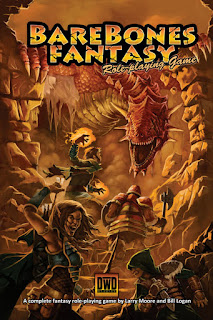 A few weeks ago I got Barebones Fantasy from Drivethru RPG. I printed it out and had it spiral bound at Office Depot. (That's the second time I've mentioned them in the last two posts. I promise, I don't work there or own stock. There's just a gamer that works the print center and knows how to do digest and booklet print orders, so he's my go-to for these things.) This isn't intended as a review, rather just my collected thoughts on the game.

I like the game quite a lot. I have to admit, for some reason it rubbed me the wrong way when I first read it. I had been reading a lot of praise for it before my purchase, and for some reason I just couldn't see what all the hubbub was about once I finally read it. That happens with me a lot, but typically when it does I put the item down and come back to it later. Sometimes I develop an appreciation and sometimes my initial opinion bears out. This was a former circumstance and upon revisiting the game I saw what all the hubbub was about.

One of things that can turn my attention away from a so-called "lite" game is characterization and character development. Some games start out with a decent amount of characterization options, but as the game progresses, development options are limited and eventually characters either plateau or start stepping on each others' toes as advancement avenues reach their ends. Not so here. There are multiple advancement strategies for players to explore with their characters, and they are not necessarily easy to achieve. Neither are they so difficult as to cause characters to feel stagnant.

The game uses a broad class-as-skill concept, similar to Warrior, Rogue, Mage. The class/skills are Cleric, Enchanter, Leader, Scholar, Scout, Thief, and Warrior. They are pretty self-explanatory and cover what you would expect. Since they are skills, the need for multiclassing rules is completely obviated. In that way, the game is like Barbarians of Lemuria, in that a character can have levels in several iconic skills. It would be quite easy to stat up Conan in this system.

Magic is pretty cool, with a very short spell list that still manages to cover more ground than many spell lists five times its size. Spell are very basic, almost like templates, that the caster can do multiple things with. Spells also scale with caster's skill level, so each spell is almost like three or more spells based on that fact alone. 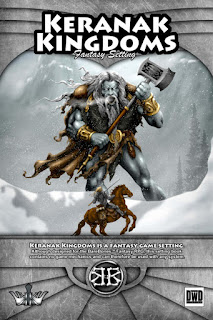 There is also a setting touched on briefly in the main book, and further fleshed out in its own supplement. Keranak Kingdoms is a barebones sort of campaign setting, done in self-professed "broad strokes". The map scale is quite large which means it is very easy to stake a portion of the map for personal development and not worry too much about being encroached on by future releases.

The game is well-supported, both by the community and DwD studios. They have recently released a supplement of playable races that looks very good.

DwD also has released several adventures, some included in the Drivethru purchases.