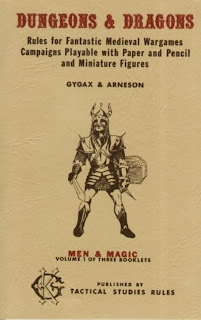 The success or failure of a to-hit roll in OD&D depends on the target's Armor Class (AC). In its earliest form, AC was based entirely on the actual armor worn by a character, or the relative protective value of a creature's hide. Things such as Dexterity bonuses or magic armor modified the attacker's roll, not the defender's AC. Mathematically there may be no difference, if things stopped right there. However, doing it this way does open some possibilities.

The chief option this allows is a modifier based on weapon v. armor. I'll grant you, this is not a popular option. It is seen as "too fiddly" or just too much bother by most. I happen to like it. I don't really see where it is a bother. It is a fairly simple matter to jot down to-hit numbers on your character sheet. Most old-school character sheets include a small matrix for just such a thing. It is a small matter to fill that in for your weapons, with the modifiers already factored in.

The main reason I like this option is it introduces a mechanical reason to influence weapon selection. With the OD&D paradigm of all weapons doing d6 damage, I like the idea of having something that prevents weapons from being generic. I don't want to turn this into more of a weapons discussion, though. That's going to be another topic.

In my gaming travels, I have run across several ways to handle armor. The other main method is to have armor absorb/block/soak damage (terms vary). In these systems the to-hit number remains relatively fixed, based on attacker's skill, sometimes modified or cross-referenced with defender's skill. If the attacker is successful, he rolls damage. The defender subtracts his armor's rating, and applies any remaining damage to the character. If the damage roll is less than the armor's rating, the character takes no damage.

I played in a GURPS campaign once. GURPS armor functions in this damage-reduction model. There were so many times in every combat encounter where rounds would be fought with no effective damage being dealt. We had our share of successful to-hit rolls, but many times there wasn't enough damage to penetrate the armor. It finally dawned on me that this is what "misses" are in D&D (any flavor): they aren't necessarily misses at all. They are simply failures to cause damage. Sadly, even with that epiphany (which I had almost 20 years ago) I doggedly continued to search for a system that featured damage reducing armor because I was still convinced it should be the True Way.

I am pleased to say I abandoned that foolish quest and I am now quite satisfied with OD&D's take on armor and armor classes.
Posted by David at 5:21 AM