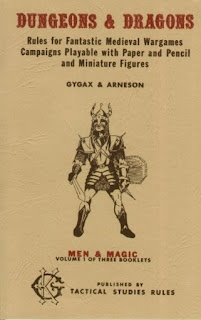 An archetype is defined as "an ideal example of a type". We've all heard D&D classes referred to as archetypes. They are the base foundations of the characters found in the source literature. The idea is that using one of the three (or four, if you go to Greyhawk's thief), you can model pretty much any character from the stories we all know and love. Like all things with D&D, though, this takes imagination. Is Aragorn a fighting-man, straight from the book? What about Conan? Are Gandalf or Elric magic users? Of course not.

I enjoy reading new classes. I used to love it when the latest issue of Dragon featured a new class. I don't like having them in my game so much, though. For me they are like detailed skill systems: they limit player options. In fact, a lot of classes are almost like skill packages added to one of the Big 4. They take one of the archetypes and add special abilities, impose a few restrictions, tweak the XP table, and BAM! New class. The only problem is, when you make a class that automatically enjoys a +2 to saves vs Illusion, it feels like they're the only ones that should have that. Furthermore, at character creation, if a player envisions a character that sees through illusion better than most, it implies that he must be that class. Otherwise, it cheapens that class.

One of the things I really like about DCC is its philosophy about this sort of thing. In a nutshell, if you want your character to be perceptive enough to see through illusions better than most, figure out a way to quest for it. Maybe perform a great deed for the god of acuity and he will grant you such a boon.

I also don't have a problem as referee with working with a player to create and develop the character he envisions. If he wants a guy good and tracking and wilderness survival, I would rather him roll up a fighter and we'll role play the rest. I'll just give him a little bonus on whatever roll I call for in wilderness situations. If you play with a relatively mature group that is out to have a good game, that's no problem at all.

So, the bottom line is that I like additional classes as ideas. They may give me an idea for a different direction to take a standard class. Suggest some abilities that a player may like to add or quest for. Yet, when it is all said and done, all the characters in my game will be firmly based on one of the archetypes.
Posted by David at 5:49 AM