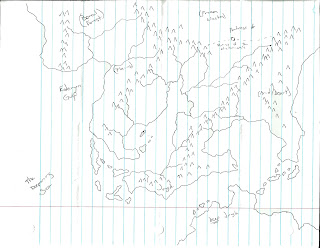 This is a hand drawn sketch (obviously) of a new setting/world. I was waiting for my wife at an appointment she had Saturday morning, and it just came to me. It's going to be a gritty, S&S themed thing. I feel awkward over what to call it. I hate calling it setting because that, to me, connotates something designed as a backdrop for a specific purpose. I don't feel comfortable with world either, because obviously, it isn't. Besides, I know me, if I start calling it world, then I'll feel compelled to venture beyond the confines of this map. I want to keep my efforts focused here.

Anyway, I'm going to develop it along the lines of the small-kingdom concept I discussed in this thread. I'll also be trying out the Welsh Piper's Hex-based Campaign Design.

Speaking of it being gritty S&S, I've come to realize something. I don't want pure, true-to-the-sources S&S. I want an S&S style, but I don't want to throw out the baby with the bathwater. I still want some classic D&D tropes. Some. For example:
So, there it is. This will be my design log, which I'm sharing in hopes of getting feedback that will help me do this the best I can. This map is the starting point. I'm going to port it into GIMP and try to pretty it up. That will be submitted for comment, as well.

PS> The name is pronounced EYE-loria.
Posted by David at 12:23 PM